The influenza virus, in its many strains, is responsible for everything from seasonal flu to the occasional pandemic. It is an RNA virus whose genome is split into 8 strands, each neatly wrapped around packaging proteins in order to fit in the virus’s envelope. While most of the RNA genome is wrapped around the nucleoproteins, the termini are thought to remain uncomplexed and interact with each other. 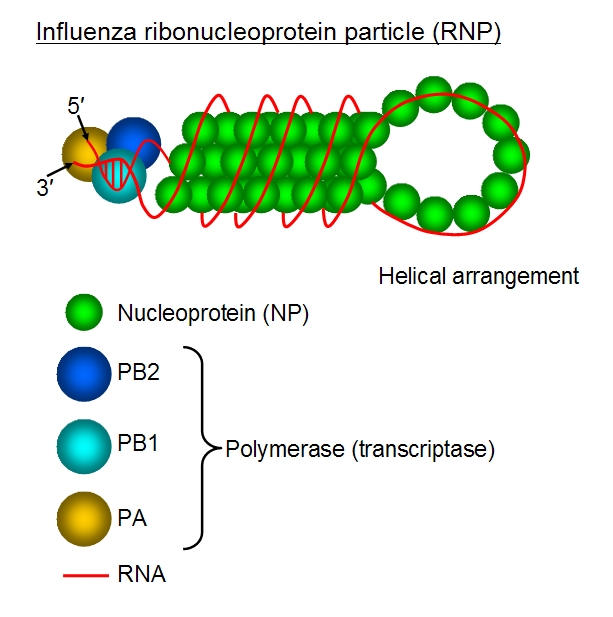 Fig. 1: Segment 5 of the influenza virus, wrapped into a ribonucleoprotein particle

It’s been speculated that this packaging is mediated by RNA secondary structure. The purpose of this project was to search for evidence of that structure in silico. We found windows of low sequence diversity matching our expectations, but we didn’t find evidence of co-evolving nucleotides.

This was a group project that I completed during my PhD in Bioengineering, in the context of a Computational Biology class that I took at MIT.

We used 2912 unique sequences from the Influenza Research Database (IRD). We focused on segment 5 because it isn’t divided into multiple subtypes or alleles, and is also the shortest of the 8 segments in the genome.

We used Clustal Omega to perform a nucleotide multiple sequence alignment. In order to prevent alignment problems, we trimmed gaps at the sequence termini and removed about 1% of the sequences that had other gaps. This resulted in 2895 gap-less coding sequences. The IRD data come as sense strands of DNA, as opposed to the negative sense RNA of influenza viruses. We thus reverse-complemented our sequences before performing entropy and mutual information calculations, and transcribed them into RNA prior to performing in silico folding.

Given the importance of RNA packaging for viral replication, if the terminal ends are important for packaging then we’d expect them to be highly conserved, which would show up as relatively low sequence diversity. Previous sequence diversity analyses had been performed on a few hundred viral sequences1, and had identified low sequence diversity at both termini of each segment. We successfully replicating their findings by calculating a rolling average of the local Shannon entropy, using a 39-nucleotide (13 amino acid) window throughout Segment 5 (Fig. 2). Our work shows that their conclusions can be extended from the few original sequences to the entire currently known dataset.

Fig. 3: Segment 5 entropy, calculated for each nucleotide. Windows of particularly low sequence diversity show up at the termini, and are marked here with predicted secondary structures for those regions.

To directly search for secondary structure at these windows of low sequence diversity, we individually tested subsets of these regions using RNAalifold from the ViennaRNA package3. Due to the limitations of RNAalifold, we used a randomly sampled subset of 400 sequences from the 2895 in the database. We only tested for secondary structure formation within each packaging region. We extracted the first and last 100 nucleotides of Segment 5. We then performed in silico folding on 20 sequences of increasing length (10, 20, … 100 nucleotides) starting at the 5’ or 3’ end, obtaining the predicted secondary structure and its associated free energy of formation. 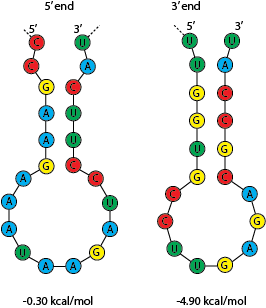 Fig. 4: Predicted stem loops for the 5’ and 3’ regions respectively.

Given our structural hypothesis, we expect that the two packaging regions will either fold locally or base pair with one another. If they pair with one another, the nucleotides in one region should have a conserved relationship with the nucleotides in the pairing region; if one mutates, the other one must change to compensate or the structure will be lost. This relationship would show up as high mutual information (MI). Indeed, previous studies on RNA folding algorithms2 point out that stems of secondary structure are characterized by anti-diagonal “stripes” of high MI.

MI can be detected computationally, by balancing an anti-diagonal measurement against a diagonal control, but we opted for visual inspection since we had only one plot (Fig. 4b). We used the MI algorithm implemented in scikit-learn to compute pairwise MI for the first and last 200 nucleotides of Segment 5. We chose this subset of positions to reduce computational runtime; it extends far enough into the interior of Segment 5 that any potential structure in the packaging regions should be included. 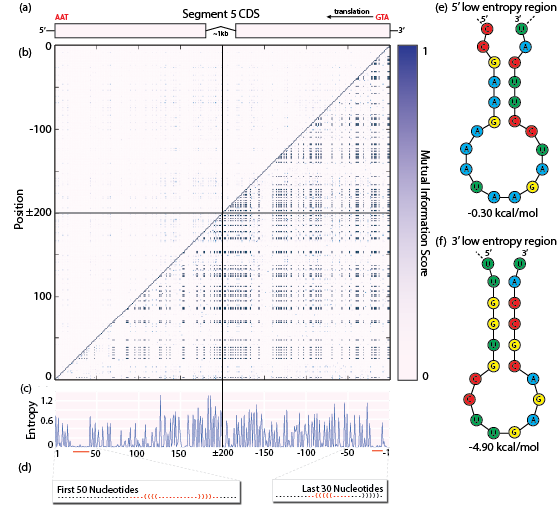 An appropriate background model for this set of sequences, which we did not consider here, would be to permute the codon usage and generate a synthetic background data set of comparable size (~3000 sequences), using the measured codon usage frequencies for that particular segment. For each amino acid in each sequence, we would randomly select a codon for that amino acid at that position (proportional to that amino acid’s codon usage frequencies). This would provide a set of sequences under amino acid sequence constraint but not under RNA sequence constraint. This background data could be used to assess the significance of our entropy results, by comparing our observed entropy to the expected background entropy at each position.